Between 1700 and 1720, during the time in which my work-in-progress novel is placed, men wore wigs and women, generally, did not. While women's hairstyles were close to a natural, nearly negligent look, men wore tall, long curly wigs (albeit their own hair trimmed quite short beneath.) The time for women's outrageously tall wigs, complete with theatrical touches such as miniature sailing ships and flags was a thing of the future (1770's-1780's.)

Head lice was a normal part of life in the early 1700's and  shampooing the head on a regular basis was considered abnormal and unhealthy. Men found they could more easily maintain a comfortable scalp by keeping their own hair close cropped and wearing a wig which, upon necessity, could be fumigated for pesky critters. Men of all classes wore head coverings, most with wigs, but at least with close fitting caps which could be worn beneath hats. At home, at least, men could dispense with their wig and wear the little embroidered cap in its place.

Although there is evidence of wig wearing since the time of the ancient Egyptians, apparently "modern" wigs came into popular fashion with 17th century King Louis XIII of France who used them to cover his balding 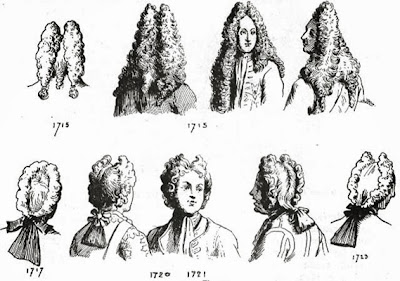 head. The first fashionably large wigs for men of the early 18th century were periwigs, full-bottomed hair pieces divided into 3 sections: 2 masses of curls falling in front of the shoulders and one down the back. Curls framed the face and extended above the forehead (often quite high above the forehead) parted down the center, sometimes giving the impression of great horns. As the years progressed and the inconvenience of so much hair became evident to all but the most leisurely of gentlemen, the wig was altered to be one length all the way around (although still shoulder-length) and sometimes divided in back with a ribbon securing the end of each section. As time passed and cooler heads prevailed, the wig decreased in size and the style of soldiers, which was to tie the hair back with one ribbon, became the fashion. The bag-wig, a pouch of gummed black taffeta with a matching ribbon was a style borrowed directly from the military. The man's wig hair was pulled back, stuffed into the bag and tied at the base. At first this was considered a form of "undress" but, later, attained popularity and obtained acceptance in more formal situations.


White or grey was the approved wig color denoting sophistication and, if the wig was not naturally white or grey, was powdered to achieve the effect. The powder was made of starch and was such a messy affair some wealthier homes had rooms set aside for the process ("Powder Rooms!") The wig-wearer held a large cone-shaped mask over his face while the powder was liberally applied.

After this research, I must admit I am having trouble thinking of my romantic male lead character sporting a mass of powdered curls. Perhaps he will throw convention to the wind and his wig with it. Hmmmmm....we'll see.

Have a good week, dear Reader. Thanks for stopping by...Y'all come back now!

I declare, I learn something every week. t

Thanks t, me too!

Why call it an unfortunate fashion statement? To modern eyes it might look silly, but a man without a wig - sitting in a room from the period - would look odd, incompletely dressed. "Context" is important. Today, wig wearers try to hide the fact that they wear wigs. Centuries ago, everyone KNEW that wigs were wigs. Their purpose was different. On men, they look like lion's manes, and really can suggest majesty or importance, totally fitting for an age that conveyed, in art, architecture and music, the same.

It was truly a fashion but I think these also could be human hair wigs. Maybe I am wrong. Thanks for info!